For the past year, I’ve been toying with the idea of writing a short book about the urban Amazon. Most of what is written about Amazonia is focused on its forests and rivers, its flora and fauna. When people are discussed, most often it’s indigenous groups living in isolated reaches of the region, or those who are fighting against bulldozers and dams that threaten their livelihoods and even their very lives. I don’t want to detract from any of those struggles. They might matter now more than ever. But today, it’s usually overlooked that the bulk of Amazonians live in cities, and little of the media coverage that circulates outside of the region is focused on their lives.

Here I offer a brief introduction to the urban Amazon, and more specifically, the Amazonian city of Manaus:

The American writer John Dos Passos once described Manaus as “a city beset with nostalgia.” From his initial impressions, he remarked: “Stories of failure in face of the rainforest hang about every street corner in Manaus. The city’s history is of great plans gone awry. Even the building of the new air-conditioned hotel, which was to have brought in the benefits of the international tourist trade, ended in the bankruptcy of the promoter. Already the new hotel wears the air of having seen better days” (dos Passos 1963:118).

For many visitors to Manaus, like Dos Passos, Manaus’s better days are seen as those of the Rubber Boom in the late 19th and early 20th centuries. This period led to unparalleled concentrations of wealth in the city, rivaling even some of the primary European and North American centers of commerce at the time (Garfield 2013:17; Grandin 2009:26-28; Mann 2011:325-326). Manaus was the first Brazilian city to install electric lights and a trolley system, which was boasted as one of the most advanced streetcar networks in the world. It is said that men lit cigars in the city’s streets with large denomination bills and took baths in champagne while women had their laundry sent to Europe. Opera stars from Italy even traveled across the Atlantic and up the Amazon River to perform at the famed Teatro Amazonas as depicted in the opening scene of Werner Herzog’s film Fitzcarraldo. The opera house also served as one of several examples that inspired the anthropologically-trained novelist Amitav Ghosh to write: “On the banks of every river you’ll find a monument to excess.”

Today, when visitors to Manaus see the architectural relics of the rubber boom wealth, many of which are now crumbling from neglect, Manaus is indeed seen as a city of great plans gone awry. With the crowding of rural migrants into squatter settlements that appear haphazardly at the city’s periphery, the growing pains of modern industrialization are all too apparent. But to read Manaus as a city haunted or even mocked by its past is simply too easy, and in many ways, quite misleading.

Currently, Manaus is the city with the 6th largest contribution to Brazil’s gross domestic product, falling only behind the giants of the south and southeast, including São Paulo, Rio de Janeiro, and Belo Horizonte. Although the Amazon region is typically envisioned as the heart of pre-modern Brazil, it is the center of production of a significant part of the country’s modern electronics. When I arrived to Manaus in 2003, it produced all of the countries CDs, and today smartphones and flat-screen televisions are assembled in its Free Trade Zone.

Still, Manaus struggles to gain recognition in Brazil and as it jockeys for position alongside the centers of power further to the south. Like Rio and São Paulo, it has pushed most of its poor to the periphery where remnants of forest that encircle the city are cleared. Meanwhile, near its center, Manaus has erected new monuments to replace those of yesteryear. In 2013, a new bridge that spans the Rio Negro was completed, costing hundreds of millions of dollars and even the lives of some of the projects’ workers. The hope is that with the paving of poorly maintained highways that once bisected the Amazonian forest, Manaus will soon be connected to the south of the country by all-weather road. Currently, the only federal highway goes north to Roraima state and then on to Venezuela. Despite considerable lags in construction, Manaus also built a brand-new soccer stadium with a capacity of over 40,000 people to host four of the matches in the 2014 World Cup. Multiple news stories commended Manaus for being friendlier and more accessible than other host cities in the country, a source of pride that Manauaras quickly shared on social media. This also served as an opportunity for the city to refashion its image in the both the national and global imaginary. Even within Brazil, Manaus is often viewed as a jungle outpost – an idea that Manauaras are eager to dispel. The website No Amazonas é Assim (roughly translated as “How it is in Amazonas”) distributed numerous memes on social media during the World Cup that challenged outsiders’ view of the city and the Amazon region more broadly. One featured an aerial view of the new FIFA soccer stadium with the overarching caption “Manaus just has jungle!!!” Another showed a view of the city center, including numerous high-rise condominiums and ironically stated “Our village, our longhouses, our Manaus.” 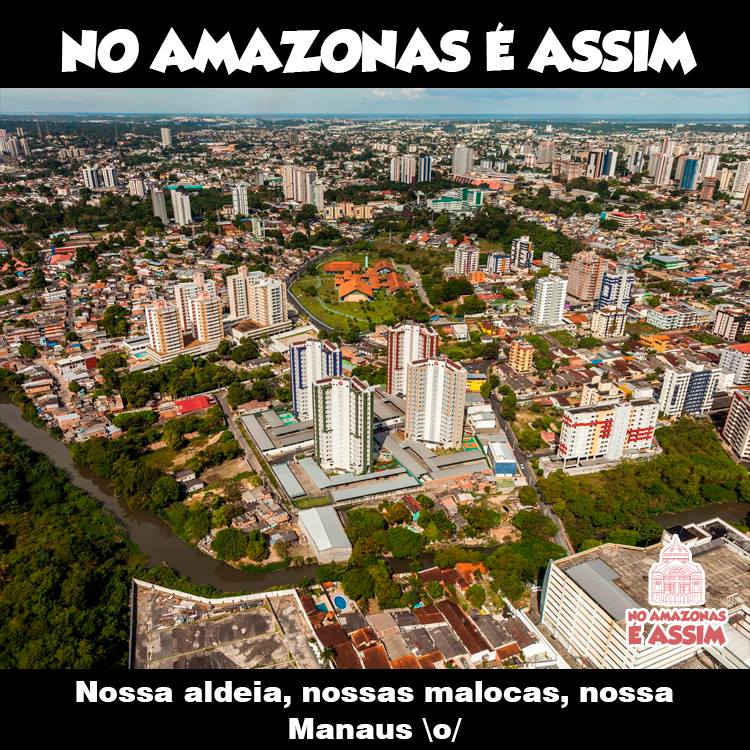 Clearly, Manauaras want outsiders to recognize that they live in a major city like any other in Brazil. State-of-the-art soccer stadiums and luxury condominiums help to legitimate their identification as modern urbanites. Yet city residents also want to highlight features of Manaus that make it distinctively Amazonian. The design of the soccer stadium, for example, drew inspiration from an indigenous woven basket. Manauaras also gush about foods of the region that make it unique, from star nut palm fruits to the pirarucu fish. With star chefs in São Paulo, like Alex Atala who sources many of his key ingredients from the state, Amazonas has even become chic in some circles.

What is troubling is that in city planners’ desire to project the image of a modern metropolis, Manaus has also replicated some of Brazil’s worst forms of social inequality. Several downtown neighborhoods that once stood near seasonally-inundated river ways were razed in early preparation for the Cup. Residents, many of whom worked in the city center, were given the option of living in pre-fabricated homes located 1.5 hours away by bus. Restaurant and bar owners in the port were also evicted for World Cup reforms, although the proposed reforms were never implemented. The World Cup even brought promises of a monorail that never materialized. In its absence, the city continues to rely on a crippled transportation system that can be described as inadequate at best.

An anthropology of urban Amazonia may not have answers to the problems outlined above. But it may ask meaningful questions about Amazonians’ demands and desires, which drive the processes of urbanization and modernization. How does Amazonia’s association with indigeneity and overwhelming jungle actually provoke urban development that works against the ideas underlying environmental conservation? In what ways does Amazonians’ view of the fantasied landscape of Rio de Janeiro and other major Brazilian cities encourage a model of urbanization that perpetuates deep social inequality and neglect or abuse of urban poor? And how do indigenous populations who have been historically marginalized view their role in constructing an increasingly urban future? These are not the only questions that can be asked. I certainly hope they are not. But as both anthropologists and Amazonians look toward the future, it is clear that it is an increasingly urban one. If you ask most Manauaras, they’ll be sure to tell you, “that’s just how it is in Amazonas.” No Amazonas é assim.

Garfield, Seth. 2013. In Search of the Amazon : Brazil, the United States, and the Nature of a Region. Durham: Duke University Press.